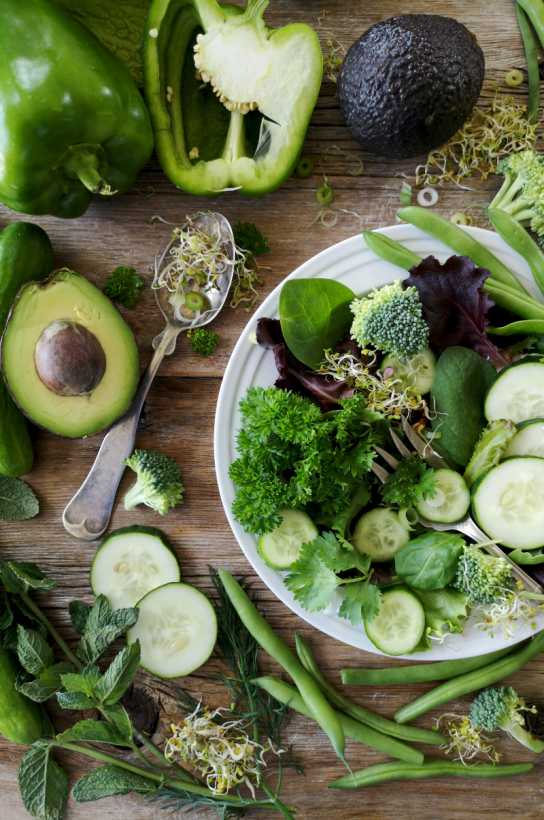 It’s the biggest growth area in food right now – as vegan dishes and menus move from pop-ups to fine dining, and from street vendors to supermarkets. Chloe Hamilton talks to four entrepreneurs on their reasons for embracing the plant-based future.

Veganuary may have been and gone but the press releases keep on coming. There’s pulled jackfruit on the shelves in Sainsbury’s, Dirty Bones are launching Dirty Vegan, Veggie Pret is multiplying and Gauthier has honed a high-end vegan tasting menu. It doesn’t feel long ago that to request a plant-based dish in a restaurant was a quirk, now it’s almost the norm. Vegan is going mainstream, but why now? And is it going to move from a trend to an established part of the food landscape?

Gizzi Erskine, chef, food writer and soon-to-be Mare Street restaurateur has cropped up in these headlines for her ‘healthy food for hedonists’ concept, Pure Filth. The collaborative creation with friend and nutritionist Rosemary Ferguson had its first outing as a pop-up at Tate Modern last December, with artist Jake Chapman’s limited edition ‘unhappy meal’ lunchbox casting a cynical, anarchic undertone. Their stand against the fast-food industry and its over-consumption of cheap meat fuelled the conversation about making plant-based food good enough for everyone – and the ticketed events sold out.

It wasn’t always going to be an ethical plant-based statement, indeed at the beginning of development there was meat on the menu. But after digging deeper into the environmental impact of intensive farming and its contribution to climate change, Erskine and Ferguson were compelled to fill a gap in the market. In their development kitchen they worked, not on another veggie bean burger, or a seitan creation, but something that would feel comfortable in everyone’s hands. “You have people very cleverly designing burgers that act and feel and bleed like meat,” says Erskine, “but the vegetarians and vegans I know won’t be interested in eating that – aside, maybe, for novelty reasons. And what about the meat eaters? Ultimately the fast food industry has to implode at some point… science is saying we might not be able to have beef eventually. At which point, what are people going to eat?”

Although not vegetarian or vegan, Erskine has taken a conscientious approach to eating meat for the past 10 years, placing value in where it comes from and eating it infrequently. “Moderation is fucking boring, isn’t it? No one wants to talk about how boring moderation is. But let’s moderate our meat intake in the same way we moderate our drinking or smoking or whatever – it’s a luxury.”

She cites Neil Rankin and Richard Turner as two of the best meat chefs who share this approach and who follow a mostly vegan diet. And she points out that veganism doesn’t just belong to hippies and health food bloggers: “It also comes from rap and grime music with artists like JME. That’s the most exciting part of it, you go down to Boxpark in Croydon and they have two or three vegan places and they’re all really cool with loads of rappers in there and grime artists. That’s a really cool movement.”

Pure Filth’s part in the vegan movement is very much geared up and ready to go. Since their pop-up at Tate they’ve refined their burger patty to be even better than before, their manufacturing operation is all laid out and the only thing they’re missing is the perfect first site. “What we really want to do it get our first site and build it and love it and learn from it and understand exactly what we’re trying to offer. But the ambition is to go multi-site,” Erskine explains. “This is not just coming out from one idea, this is a movement and we really want to work with the movement in order to educate people about eating meat. Because the way we’re currently eating it isn’t good.”

Meriel Armitage, founder of the popular vegan street-food operator Club Mexicana, made headlines in January when she opened London’s first vegan pub, The Spread Eagle in Homerton, with friend and publican Luke McLaughlin. But the climate in which she’s done so is dramatically different to when she started her business. “When we first started trading with Kerb we didn’t put ‘vegan’ anywhere on the menu because it would scare people off”. But the pub has already attracted a complete cross-section of people coming in; some who’ve been vegan for 20 years, some who are brand new, “really enthusiastic vegans” and others who maybe eat meat two or three times a week and want to eat vegan the rest of the time – the oft-quoted ‘flexitarians’. “We want people to feel totally comfortable doing that and we don’t want to preach or tell people what they should do. We just want to give them a vegan meal they absolutely love”.

Armitage’s own veganism is motivated primarily by the ethics of where meat comes from and the nature of the dairy industry, but she acknowledges that over time, other reasons creep in. “I was pretty naïve to the environmental impact of meat production until I started to read up on it,” she says. It was whilst working in advertising in Melbourne, with its vibrant vegan scene that she went from vegetarian to vegan. “It was so easy and didn’t feel at all like I was missing out. I worked in an industry where people would go for really expensive lunches and all I would do is call up the restaurant beforehand and they would do me a seven-course vegan tasting menu. Or going out for dinner with friends you could happily suggest a vegan place and they’d all be like ‘yeah ok, brilliant, let’s go there’”.

She experienced a similar scene whilst travelling in the States and, on returning to the UK, was disappointed to find it was “a bit of a wasteland”. Even at Street Feast in Dalston in 2012, where some of the most innovative food was happening, none of the traders were serving anything vegan. So Armitage quit her day job and Club Mexicana was born.

In today’s context of plant-based populism, Armitage says putting the word ‘vegan’ on their street food stall means getting a queue of people before anyone else. “As we’ve taken on the pub we’ve had to look for some help with press because the amount of request we’re getting – for collaborations, pop-ups, residencies – is insane”. So much so that they’re having to turn things down. “I think it’s on everybody’s radar now and it’s something people can’t shy away from, because it’s the truth about where a lot of our food comes from. It’s started a massive conversation that will keep on going.”

Outside of the London scene, Adele Ashley has just as tangibly seen the surge in demand for vegan food. Her Yorkshire-based healthy eating brand Filmore and Union has grown to 16 sites since it first opened in York in 2012. “I’ll be honest,” says Ashley, “when we started we didn’t consider vegans, only vegetarians. About 40 per cent of the menu was either vegetarian or dairy-free and over the past couple of years, these have morphed into vegan options, purely due to the demand for it”. The challenge, she says, is to keep it interesting: “You can go anywhere and have a risotto but we don’t want to put anything on our menu that you can get at a high-street restaurant. We’re used to going that extra mile.”

And they did literally go the extra mile(s). Ashley, a pescatarian with a lactose and gluten intolerance (her own perfect customer) has a major hand in menu development and recently took her chefs on a research trip to New York. They scouted out plant-based restaurants – Jean-Georges Vongerichten’s abcV being a favourite – in the search for new ideas and techniques to take back to their test kitchen in Wetherby. Chickpea water and nutritional yeast are common components of their menus and they now hold monthly vegan nights at some of their sites, which are known to sell out.

But Ashley maintains the emphasis is on being a neighbourhood restaurant, somewhere you can bring your granny and your dog and there might be one person in the group who is vegan. “It’s a subliminal message,” she says, “those that are gluten-free or vegan or veggie know what we’re about. But we don’t want to shout about it because we don’t want to preach. We don’t want to sit in a niche category; it’s daunting for people to go in somewhere that’s too niche”.

Back in London, Notting Hill’s Farmacy might once have been seen as a niche concept, with an overtly health-focused brand and a fully ‘veggan’ menu, aka vegan but with eggs. Certainly the syringe-style vitamin-rich shots got plenty of press attention, as did the famous-family background of the founder.

But Camilla Fayed, who opened her restaurant in 2016, recognises the importance of appealing to a wider audience. “As more people turn to a conscious lifestyle, there’s an increased demand for places that offer a fun and stylish atmosphere too”. A lot of thought goes into their lighting and music to create a grown-up evening atmosphere. And their standalone bar, private dining room and high tea menu are features more common to ‘mainstream’ venues.  The plan for Fayed’s ‘friendly face’ of plant-based eating is to open several other Farmacy sites in London and to eventually expand the brand worldwide. There’s a book due this summer, too, to add to the boom in vegan cookbooks being published.

Motivations may differ, from a personal drive to expand diners’ horizons – as these women show – to seeing an opportunity to make money from a fast-growing market (see chains and supermarkets), but the consensus between those at the forefront of the vegan movement is that progress unequivocally lies in shaking off the niche image and confidently conquering the middle ground. In a generation where meat is a cheap commodity, the relentless influx of vegan news is a sure sign that chefs, restaurateurs and big business are finally paying attention.

Supermarkets are investing heavily in vegan ranges this year, and there’s even a vegan Baileys on the market (which sold out on first launch). “The people have the voice in this dynamic and increasingly it’s being heard,” says Gizzi Erskine. “There’s a huge revolution going on out there.” 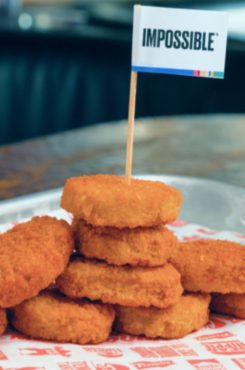 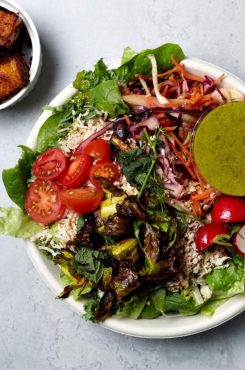 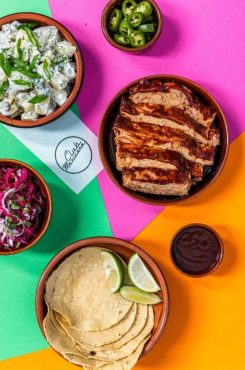