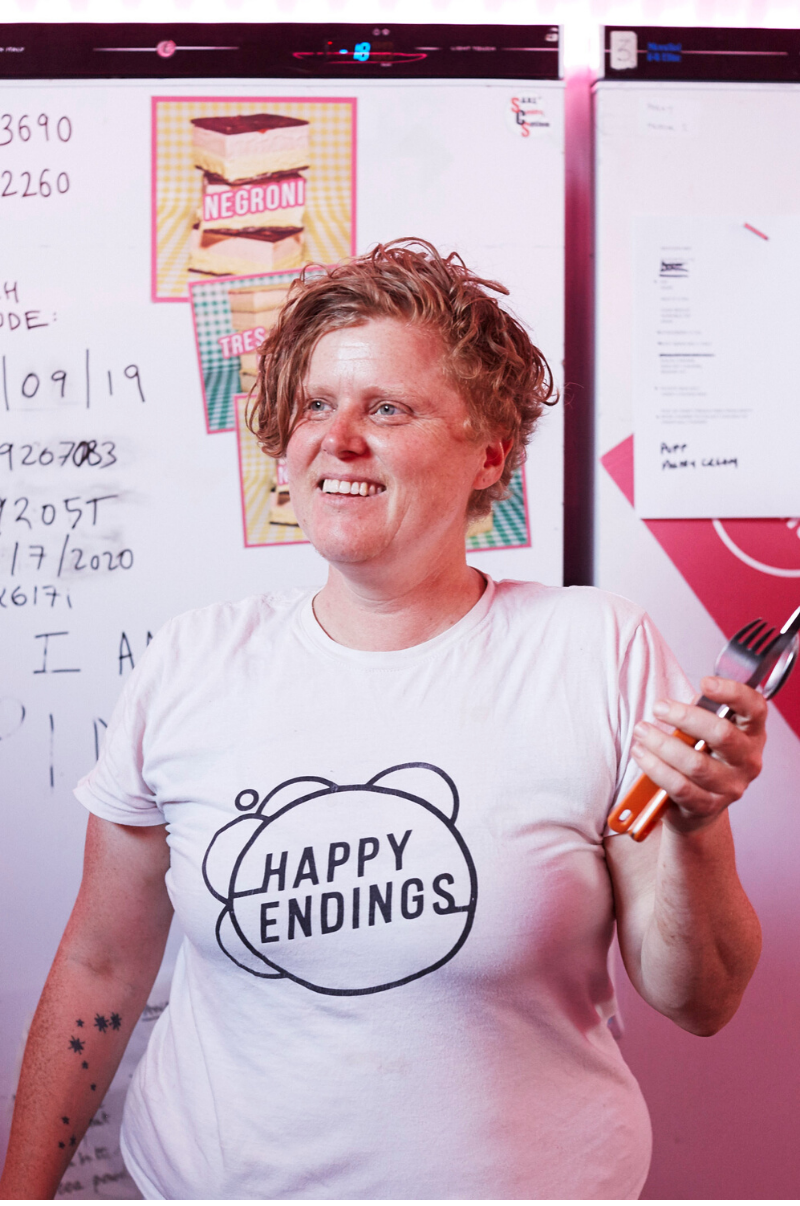 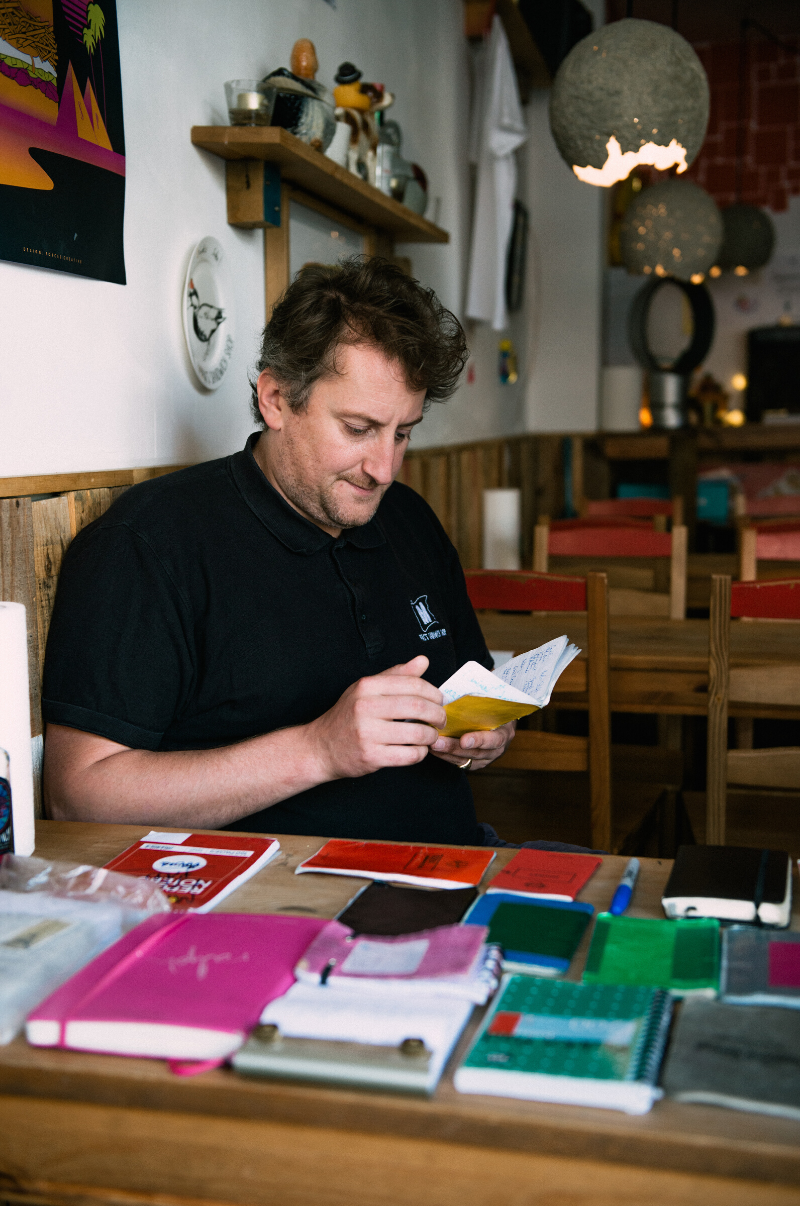 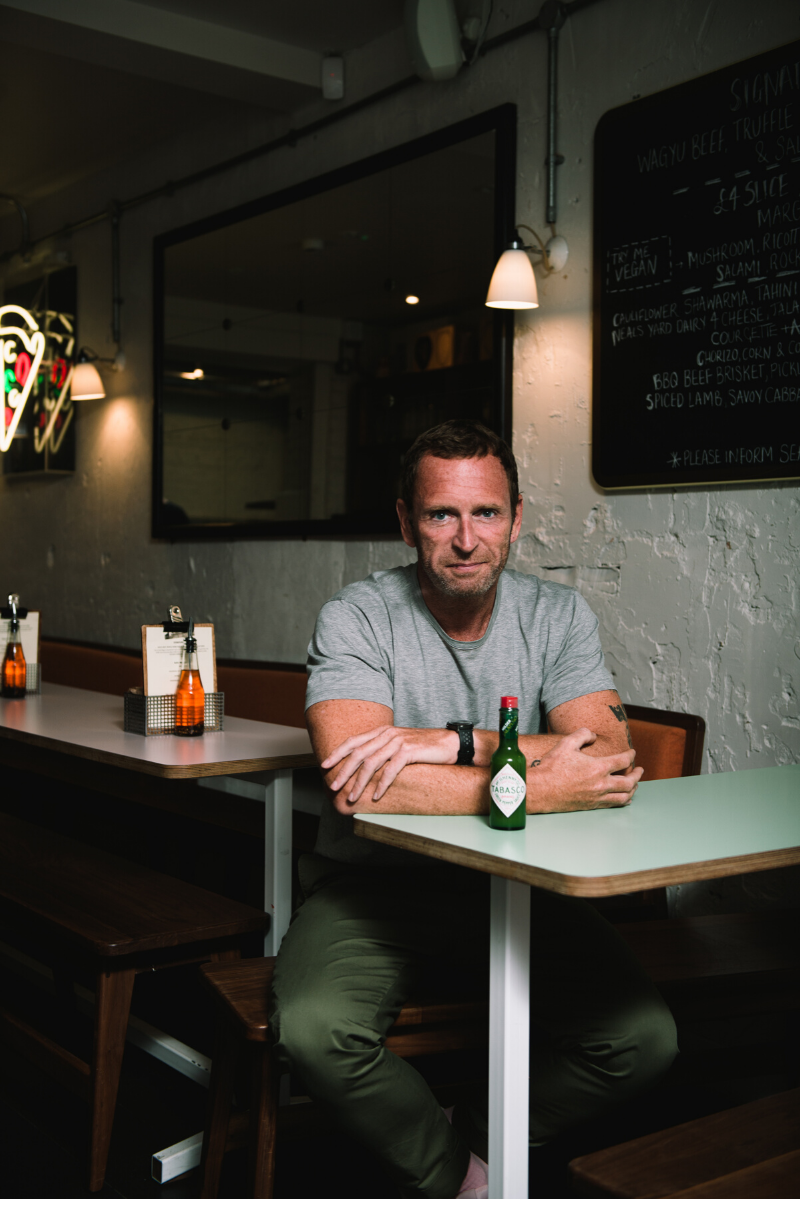 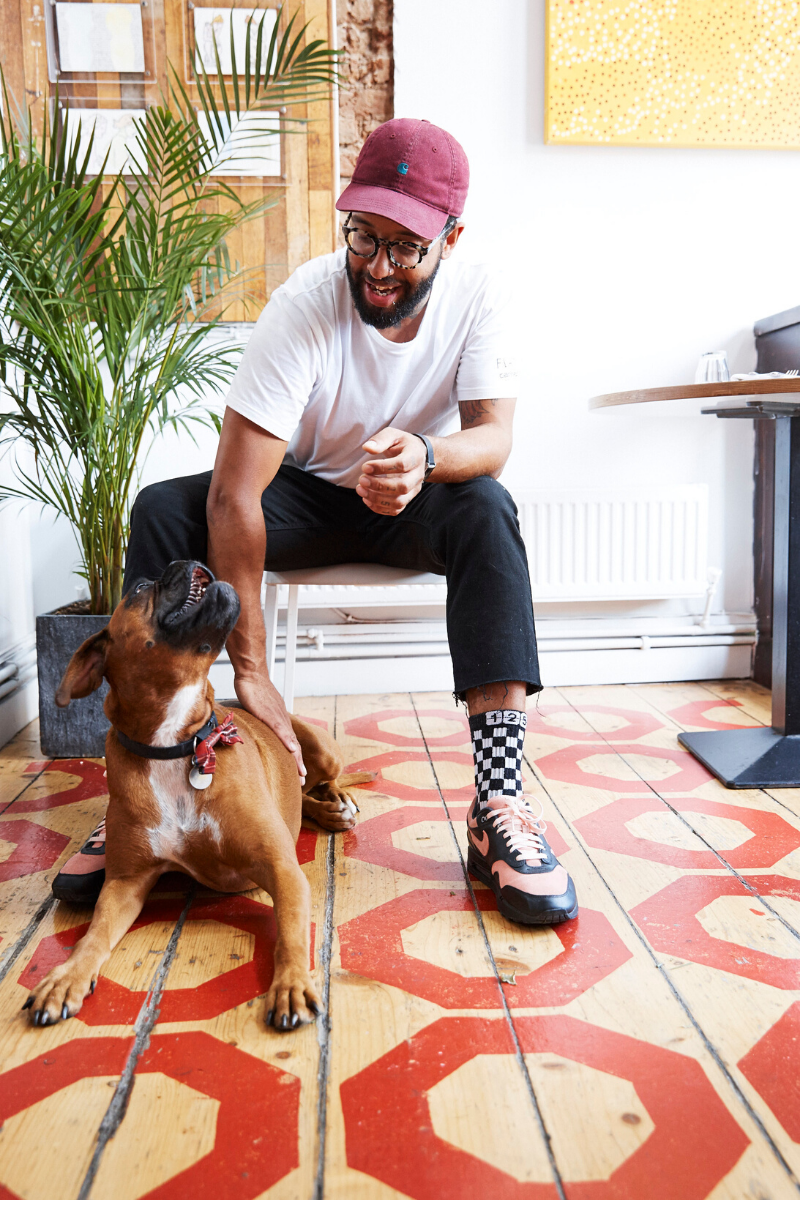 What’s your favourite belonging, something that makes you truly happy? Lisa Markwell asked five hospitality figures to name theirs. Photographs by Harriet Clare and Sabrina Dallot-Seguro

It’s only been open just over a year, but Tom Brown’s Cornerstone has quickly become a classic restaurant

“My grandad was a massive Arsenal fan and me and my brother used to watch the games around at his house, so I’ve always been a big Arsenal fan. Obviously when I moved from Cornwall to London it made it a lot easier.

I wanted a season ticket, but there’s always been a notoriously big waiting list. There was a receptionist at the Capital whose son had one. She said, “I can put you in touch with someone who often gets tickets”. So I met up with these guys and became very good friends. Now I do it as a half-share system with one of them. It works pretty well, especially well for me because Saturday afternoon kick-off is the worst time, so I’m always thinking of the Sunday games.

The amount of times I’ve come away saying, “I fucking hate football.” But I do really love it. It’s like when you go to a really good restaurant, it doesn’t matter what you order, it’s just an amazing atmosphere and experience. It’s almost like a religion in a secular society. I think that the actual 90 minutes is almost like the least important part of it.

It’s meeting up, brunch at Black Axe Mangal, then get a few pints, and off to the game. Aaron Ramsey came in for dinner and offered to let me watch a game in his box. I was like, “Err, fucking yeah.” It was mind blowing. But you’re removed from one of the things that is so good about football. You go to sing, you go to shout, “the referee’s a wanker.” Know what I mean?”

Terri Mercieca runs the wildly popular ice-cream company Happy Endings, which as well as supplying restaurants, also sells at events and festivals. At this summer’s Lost Village, they sold more than 2,000 of their distinctive ice-cream sandwiches

“This is my nana’s cutlery. She’s passed away now but she was Italian and used to make the most wonderful food – as soon as we’d walk into her house in Sydney, we could smell the pasta with Napoli sauce and we knew we were in for a treat. She would have a big bowl of pasta with loads of cheese and you would walk straight in the door and eat the pasta with this cutlery! When she died my siblings and I took a set of cutlery each to remember her by. The other day I was unpacking my stuff and was ‘Marie Kondo-ing’ my house. I came across this set of cutlery and thought ‘they’re still so nice. Yes, they do spark joy!’ Then I made her sauce and sat with my girlfriend eating pasta with these.

I think she was my favourite person in the world, so compassionate and loving. She loved cooking and I think she’s probably responsible for us all comfort eating, because she was such a soothing person, very loving, through her food. You would always know that if you were going to her house you would be fed well, totally laugh your head off, have cuddles and play bingo. She was a proper Italian!

I only have one of each piece, but I’m pretty sure my sisters and brother have the same sentimental feeling about them as I do, so I can’t take take theirs…”

Max Halley is the owner of Max’s Sandwich Shop in Stroud Green, which has a cult following for its vast, quirky gourmet sandwiches. Last year he published Max’s Sandwich Book, which is on sale in the restaurant, with non-signed editions at a discount

“Everything good that has ever happened to me, that I have made happen myself, has happened as a result of notebooks. I never go out of the house without one. My dad’s a journalist and I was taught that you never ever leave the house without a notebook and pen. I’ve got a short-term memory like a squid and I will forget otherwise… I’ve got notebooks going back to when I was at school!

I like pens too, especially Sharpies. I’m not into Moleskine, it’s a rip off! I’m a utilitarian notepad guy, apart from my posh desk one, which my mum gave me years ago.

I have different sized notebooks, from the desk-sized one down to a pocket size that gets tucked into the trenchcoat, which is part of my default outfit – black polo shirt and shorts. I’ll sit on my own on a Sunday night and go back through my week’s notes and sometimes I might re-write them! So, I’ve got my desk pad and the spares and then I’ve got these little thin ones. Sometimes they get so bashed that I gaffer tape them to try and stop them from falling apart so much!

It’s not all just work stuff I write down, it’s everything I ever think about! The wonderful thing about the notebook, which my Dad was always keen to hammer home to me is that it’s not about the notebook, it’s about the act of writing something down. It’s almost like editing and keeping on top of oneself somehow.

The really good ones I rip out and I put them on my wall. The core stuff is always in the middle, like ‘don’t forget mum’s birthday!’ or ‘get front door replaced at sandwich shop!’”

Mark Wogan is the proprietor of the hugely successful mini-chain Homeslice. The pizza restaurants have been a London fixture for more than six years now, recently celebrated with special editions for each of the seven branches

“I first got introduced to green Tabasco by Richard Corrigan, about ten years ago. He recommended it to go with a fish pie, like a posh ketchup. I really think Richard is, pound for pound, the best cook I’ve ever met.

Then discovered subsequently that it goes with almost everything, and has been my goto condiment ever since. And I have it with everything.

When you’re working you get home late, you can’t really be bothered to cook anything significant, so how do you make it interesting? You put green Tabasco on it. It is honestly one of the best things you can have – also, in the morning, a fried egg on toast… green Tabasco! It’s phenomenal, one of the greatest inventions since the wheel.

It’s a lot milder than red Tabasco which, when you put it on, that’s all you taste. This enhances food. A splash of that on a cheeseburger, and it just lifts the whole thing up. So it can bring joy to almost every single food stuff.

It’s almost impossible to get hold of the big bottles, so I order them in bulk on Amazon. I give it to lots of people as presents to change their lives. And I start to get slightly anxious if I’m down to one bottle.

The winner of this year’s Great British Menu, chef James Cochran has had a chequered few years, losing control of his own name at one point. However he is now running the highly successful 12:51 restaurant in Islington and a new project, GOAT, at Boxpark Croydon

“So, I’ve always been wanting to get a dog for ages and then my girlfriend decided to say “Let’s get a dog, let’s get a dog” but at the time it wasn’t practical.

They take up a lot of your time and I had a lot going on with work and the struggle to gain control of my own name. Finally back in 2017, we managed to find a flat that had a garden with it and then I was like, “I don’t really find Schnauzers as really proper dogs. I just want a proper dog, I want a big massive fuck-off dog.

I did loads of research online, and then I knew exactly what type of breed of boxer I wanted to go for. It’s either a brindle or this cheeky little number. Then when I first saw her, she literally came to me and started licking my face and it was like, ‘this is the one’.

We called her Bella because my best mate’s dog was called Bella, who passed away. It’s like having a nanny for a child: we pay something like £500 a month for dog-walking. Luckily the restaurant is doing well, it’s really established now and I have a great team. We’re selling merchandise and I’ve been able to do a few festivals. Plus Jess is freelance, so that enables us to have Bella with us a lot.

The joy she’s brought us has been unbelievable, and I’ll never change her for the world. Me and Jess, we love our dog more than we actually love each other. We won’t split up, but if we did… well, Bella has my surname!” 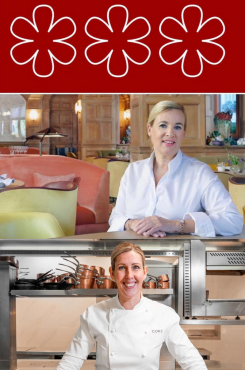 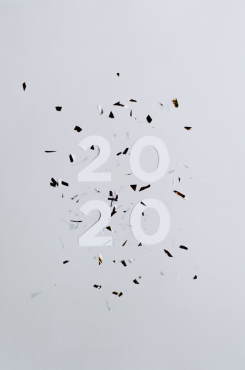 Looking back… and forward 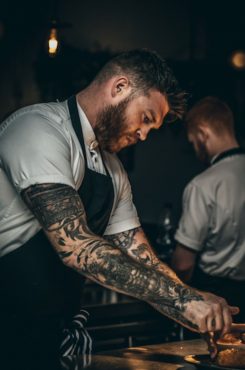