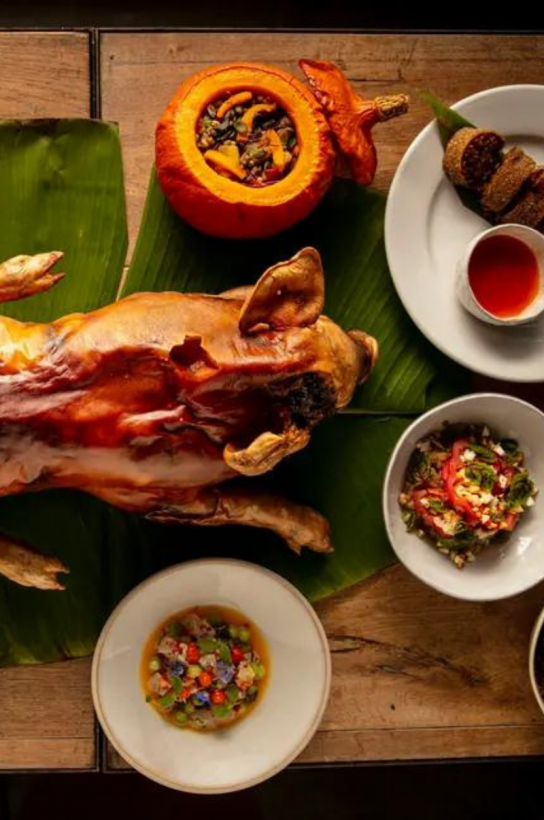 Next up at 10 Heddon Street is Ferdinand ‘Budgie’ Montoya, who on 23 November will use the space to launch Sarap Filipino Bistro, a celebratory restaurant where “authentic flavours” are “delivered proudly inauthentically”. Montoya arrives in Mayfair following the success of his more casual site in Brixton, and though his next venture will be a little more upscale, his modern interpretation of Filipino flavours remain the focus. The menu will be centred around a Lechon suckling pig – a speciality in the Philippines and a hot favourite at Sarap BAon in Brixton – which will be served whole and stuffed with aromatics and with truffled adobo pork rice. Smaller plates will include ‘ensaladang talong’, made with smoked aubergines, tomatoes, and salted duck egg; and ‘escabeche’, a dish of grilled monkfish, sweet and sour red pepper sauce, and pickled peppers. Montoya said: “I’m so excited to be opening… it’s a fantastic site with a great track record in launching some great restaurants. I want to build on our work at Sarap BAon, championing FIlipino cuisine and showcasing it in a modern and progressive light. This is not about elevation, this is about representation.”

A new ‘pro-planet’ pub will open in Clapham Old Town on Monday 8 November. The Pig’s Head will be a farm to fork public house with an emphasis on sustainability. Every chair, cabinet, coaster and candlestick will be upcycled; there will be on-site butchery of whole animals sourced from small, family-run British farms using regenerative methods; and drinks will come from eco-friendly small-batch producers. Founders Scott and Maria Hunter will use renewable energy to power The Pig’s Head and will pay their staff the London Living Wage. Dishes will include rock oyster ‘hot pot’ with lamb sauce, crispy lamb and confit potato; homemade black pudding, and crispy pig’s head, pickled Aweside Farm rainbow radish and creamed leeks.

Flor the restaurant will close to make way for a fully fledged bakery and wine shop. A new bakery in Bermondsey is also on the way, which will use flours milled on site and from “trusted farmers”, with a “commitment to supporting more resilient agricultural practices”. Both sites will be overseen by Helen Evans and a bakery subscription and delivery service will launch. Co-founder James Lowe said: “Helen and the team’s love of heritage grains and regenerative farming mean that the loaves and pastries coming out of the oven each day are uniquely innovative and delicious, and Flor’s new bakery arch will allow them to experiment even more.”

A collective of top chefs in Liverpool will open a new restaurant in mid-November to “tell the incredible story of the region’s food provenance”. Barnacle is the work of The Art School’s Paul Askew, Bone and Block’s Harry Marquart, and local kitchen stars Kieran Gill and Jake Lewis. The restaurant, based in Duke Street Market, has been designed as an “intimate Scouse brasserie”, with dishes inspired by Liverpool’s finest local producers. Askew said: “My dad was Captain Barnacle Bill Askew and he sailed the world on the Blue Star lines. We are aiming to tell the story of the city’s food and cultural odyssey through its maritime history which has shaped it into the glorious place we know today.”

The chef Anton Mosimann has announced he will be stepping back from his business at the end of the year, handing over greater control to his sons Philipp and Mark. Mosimann has spent 60 years in the industry and is known for his pioneering ‘cuisine naturelle’, which he honed after being appointed maître chef des cuisines of the Dorchester hotel in London aged just 28. Mosimann will not retire completely, but will spend more time at home with wife Kathrin. They will divide their time between London and Switzerland.

Jon and Laura Vennell have put their Yorkshire restaurant Vennell’s on the market after 17 years of trading. The couple have decided they need a new challenge and are hoping to sell the place with or without the name. “Now in our 17th year as guardians of this amazing building, it is time to pursue our next adventure,” they said. “The locals have always supported the restaurant on this site, which dates back to the 70s… The scope to run this restaurant more as a business than a lifestyle is massive.”

Simon Shand has been announced as the new head chef of Leroy, Ed Thaw’s Michelin-starred restaurant and wine bar in Shoreditch. Shand said he has “simplicity and flavour in mind”, and his approach at Leroy is a culmination of formative years spent working in acclaimed kitchens across the country, alongside his love of bringing ingredients that naturally grow together on the plate. Shand started out at Gravetye Manor, Arbutus, and Wild Honey. More recently he was in the kitchen at Frenchie before arriving as head chef at the Corner Room at Bethnal Green Town Hall.

Bone Daddies’ original head chef Tom Moxon will return to the group this month. Having helped launch the ramen brand in Soho in 2012, Moxon left in late 2019 to travel east on his motorbike for an adventure, but the pandemic scuppered plans and he ended up moving back to Essex, which, in fairness, is east, but not as far as he’d have hoped. He’ll return as executive group chef to oversee menu development at Bone Daddies’ seven sites. Next year marks the restaurant’s ten year anniversary. “I’ve got some new ideas to shake the menu up a bit”, he said. 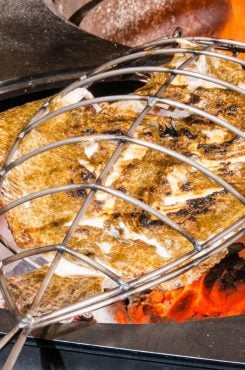 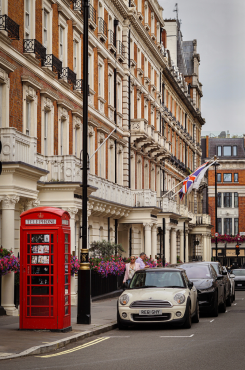 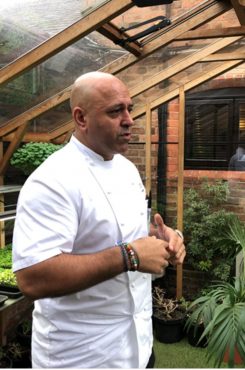