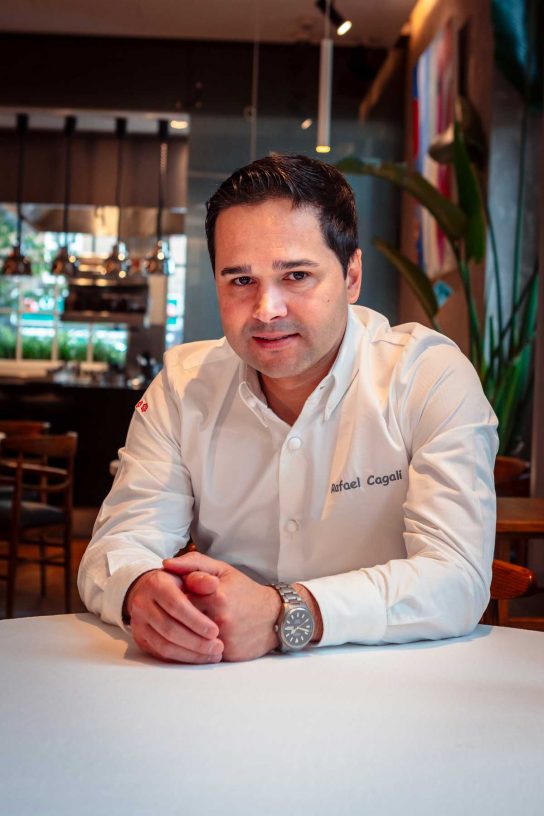 Rafael Cagali’s Da Terra in Bethnal Green had been steadily amassing accolades since it opened in 2019. It’s one of only 15 restaurants in London to hold two (or more) Michelin stars, having been awarded its second mid-pandemic when most of us were barely keeping sane. Leading up to The World’s 50 Best Restaurants event in London this July, Rafael is hosting a one-night-only collaboration with the Brazilian chefs Janaína and Jefferson Rueda of A Casa do Porco (the São Paulo restaurant with a pork fetish, currently 17th best in world). CODE caught up with the ex-Fat Duck chef about being of mixed heritage – Rafael was born in São Paulo and has an Italian background – trying not limit himself, and where he eats on his day off.

Hi. How do you feel after the National Restaurant Awards? You’re in the UK’s top 20 restaurants.

Yeah, it was a great day. We were entered for the first time last year and we got number 30, so it’s great progress to be at number 18. It’s an amazing achievement.

How did you celebrate?

We were at the awards on Monday and then we just stayed until the end – we went to the after party with other chefs and people from the industry. It was a great, fun night.

For people who haven’t eaten at Da Terra, or heard of it, how would you describe the restaurant and its food?

It’s hard to put a stamp on what we are. I don’t want to be classified as Brazilian or Italian, and I think ‘modern European’ is an old-fashioned kind of thing anyway – it’s a very common term. The tasting menu that we offer is based on my background as a chef and as a person. I lived in Italy and Spain, so I like bringing a few twists on that food, and I’m trying to bring in some of my memories from Brazil – you know, the food that I ate as a child growing up. It’s just trying to have that mixture of the Brazilian with a modern approach.

It’s because I don’t want to limit myself. To make Brazilian food you need Brazilian ingredients, right? This is one of the things that we don’t get much of here, unfortunately. And I think that’s why the quality of Brazilian food that you have here is usually poor. And I have to agree with you. There is not one place about which I can say, ‘Go in there, that will represent Brazil’s food’.

Do you have a favourite dish that’s on the menu right now?

They’re all favourites. It’s hard to pick one dish because they all have reasons to be there. They all need to have reasons, and if they don’t, they’re not good enough. They all balance well. I wouldn’t say this one is better than another one. I can say some of what people like most, but it’s very, let’s say, relative, when you know some people might want one more than the other.

We use Japanese influences, as in São Paulo. We use a lot of Japanese produce. We have a custard on the menu, and we use sakekasu, which is the rice after making the sake, to make the custard, and we use mussels and yuzu. And then we have the moqueca, which is a classic Brazilian dish – moqueca bahiana (seafood stew). People really like this. I present the moqueca looking very rustic, always, with all the ingredients to talk through. And then we bring it back and serve it in my style. I’d say that’s very Brazilian for me.

Are you excited about your collaboration with Jefferson and Janaina Rueda from São Paulo’s A Casa do Porco?

Absolutely, absolutely. Two years ago I went to Brazil on holiday and went to their restaurant to eat, and I talked to them. They looked after me really well. And I think they are the big icons. They’re doing such an amazing job for the Brazilian food scene because their style is very different than what (the now famous) Alex Atala would do – you know, Brazilian fine dining. They’re really the opposite. And I think that’s what’s exciting because it brings two different worlds of gastronomy together. And I’m excited to have icons like that here, and just share, so that we can have fun, learn from each other.

How will you mix your style with theirs?

First of all, you won’t see a pork spit going around as they have at Casa do Porco. But hopefully what they do bring is going to be exciting for diners. When I think of collabs, I think, ‘This is great,’ because you can learn from each other, and it’s all about exchanging cultures and experiences, especially for us here in London. I’m the only Brazilian in the restaurant and it’s very fine dining, very modern. I’m just looking forward to seeing what happens.

What was the first thing you learned how to cook?

If there was one dish that you had to eat for the rest of your life, what would it be?

Where do you eat on your day off? 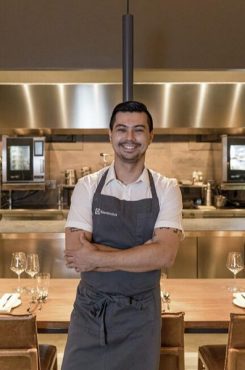