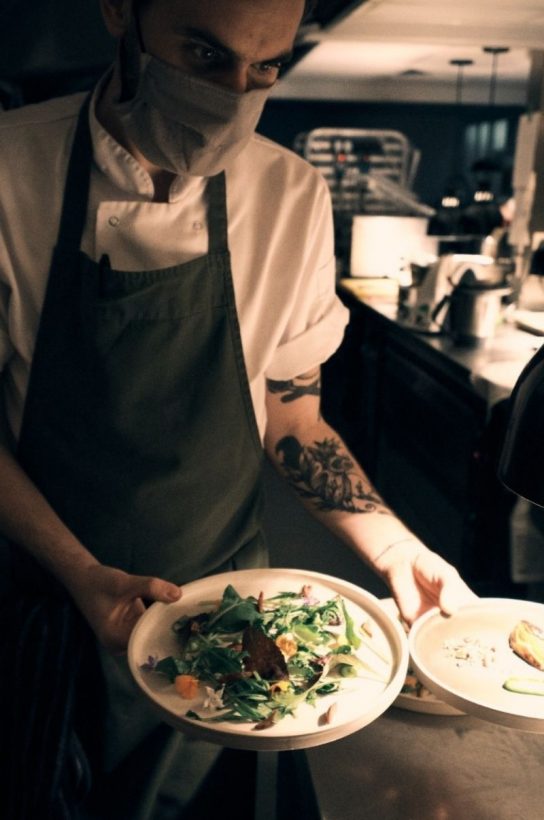 With everything else going on right now in hospitality, the discussion at the start of 2020 about tipping vs wages has gone quiet but Mark McCabe, head chef at the acclaimed Ethicurian restaurant near Bristol argues that now might just be exactly the right time for change

So much of what we take for granted when eating out is changing. Whether it’s climate change or COVID we are slowly being forced to address the niggling problem of how a hospitable industry fits into a world where we have used up much of the planet’s hospitality towards us.

Fortunately, many of these fundamental changes are easy to achieve and, when done well, will have no discernible impact on the dining experience. Things like switching to a green energy supplier, using less water and supporting local, organic producers can all make a massive difference without affecting the quality of a meal. But one change I do think should be front and centre of any new sustainable business model is staff welfare.

It is widely accepted that chefs will work long, unhealthy hours in the kitchen with many working a minimum of 65 hours a week on a very basic salary. It is also widely accepted that front of house positions will be low paid, zero-hour contracts supplemented by tips. But why? Why are we, as employers and employees, so accepting of this?

For years the hospitality industry has been on a race to the bottom – fuelled by rising ingredient costs (in a system that ironically still can’t pay producers a living wage), ever-increasing overheads and restaurant chains that, through an economy of scale, can offer cheap meals at a price that completely undermines the real value of food.

Independent venues simply can’t keep up. Even the ones that look successful are running on the finest of margins, operating from month to month to balance wages and suppliers’ bills. Everyone knows that the only way to manage these costs is by raising prices, but no one is willing to do it for fear of customer backlash.

On top of this, it is now standard practice to top up wages through tips. A tronc system allows the employer to pay everyone minimum wage and make up the rest of the agreed salary through a service charge. This approach might not seem like a big issue, after all the staff still get paid, but it leaves employees relying on the business being busy for them to earn their full wage – and ultimately, that’s not their responsibility. The ever-fluctuating amount of money they receive also makes it hard to budget, harder to save and almost impossible to get a mortgage.

Tipping used to be a means of showing gratitude and appreciation. It was a bonus; an extra thank you for a job well done.  The intention was never to use it as part of a salary. That completely defeats the point. As the margins have become tighter and tighter, we have passed the buck, quite literally, onto the staff, making it their fault if they don’t get paid enough. It’s not just Front of House either. As a young chef, I was routinely expected to sign a waiver saying I agreed to work over 48 hours a week with no promise of overtime or cap on hours. And I would sign it without even thinking twice, usually meaning I would work for less than the minimum wage, because it is so ingrained in our industry that this is how it has to be.

It seems so strange to me that we would continue to labour under a business model that can’t afford to pay its staff – a model that relies on the exploitation of skilled workers. I see new restaurants open, advertising opportunities to work under a big-name chef using the best ingredients and know that nine out of ten times they will have thought of everything except how to pay their staff what they are worth. Yet if an entrepreneur went to the bank for funding for a new business and hadn’t accounted for how they would pay a fair salary, they would almost certainly be turned away.

You could argue that the minimum wage in the UK is enough to ensure that hospitality staff are paid appropriately and that this isn’t America – where tips account for well over 50% of earnings by front of house staff. But it’s about more than paying a minimum wage, it’s about paying a dignified wage, and the fact is that tips are now used to subsidise this. They are collected by restaurants, taxed by the government and added to payslips as part of the package. Insofar as they are expected, they are no longer a bonus. So why not just increase prices by an average 10% and add that to salaries in the first place so that everyone is clear about what they are being paid?

I believe that tipping is archaic and servile and, in its current form, has no place in our industry. If we genuinely want people to consider hospitality as a viable career choice, we have to find a way to show that they are valued as employees. That compensation is not left to the whim of a customer and that the company themselves recognise and reward hard work and experience.

The government’s decision to not include gratuities as part of the furlough scheme (despite them being taxable income) has finally shocked many restaurants into rethinking service charge. London restaurants Hill and Szrok and Oklava have both moved away from tronc in light of the furlough decision and have opted to include service in the cost of the food in order to pay their staff a fixed fee. It’s a brave and very welcome move and it feels like the seeds of change may finally be starting to sprout.

There’s no denying, however, that this has been an incredibly difficult year for hospitality. Losing out on the summer trade due to lockdown has put enormous strain on businesses like ours, and the current outlook for the winter isn’t looking great either. It might seem strange for me to be advocating such radical change at a time when many restaurants are just trying to survive.  But COVID has also offered us a chance to stop and reflect. It has forced us to face up to many of the nagging questions we were ignoring as we powered through another 70-hour week. It was a chance to reset and to think about what we want our industry to be.

The restaurant where I’m the head chef is a converted glass house in a working Victorian walled garden, overlooking the Mendip Hills in Somerset. We are a small team who have always been focused on sustainability and using as much produce from the garden and the surrounding hills as possible.  It’s an astonishingly beautiful place to work and I feel incredibly fortunate to be able to call it ‘home’.

At times like this, when no one knows what the future holds and the fate of many restaurants (including ours) are in the balance, it would be very easy to batten down the hatches and double down on systems and methods that were already unfit for purpose long before the pandemic. We decided to do things differently and to use the upheaval as a chance to put our employees front and centre of our message.  We are one of the very few restaurants to be registered as a living wage company, and none of our team are ever expected to work over their contracted hours without overtime. There is an inherent risk in raising our prices to do this, but it is something we feel very strongly about, and we hope our customers will join us in celebrating the incredible people who make up our team.

In the end, the food system has to work for everyone – every producer, every employee, every business owner, every consumer. Eating out can be a joyous experience. Some of my favourite nights have been in restaurants with friends, enjoying excellent service and exceptional food. But that doesn’t come cheap, (at least, not as cheap as we’re used to) and neither should it. The amount of work that goes into creating that experience, from field to plate and beyond, is phenomenal, and that should be celebrated not undervalued.

To read more articles from the latest edition of the CODE Quarterly magazine, please click here