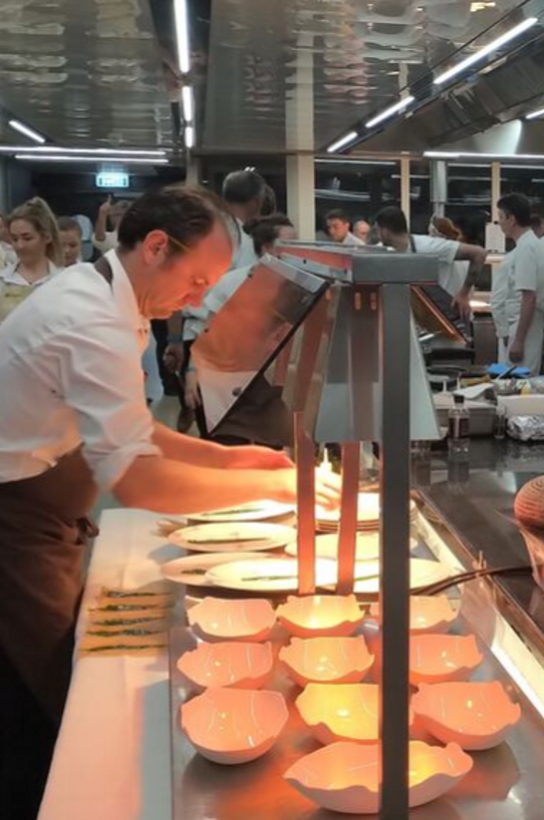 25 chefs including Clare Smyth, Giorgio Locatelli and Jose Pizarro all cooking a four-course meal under one roof. Peter Gordon and Russell Norman expediting. Hospitality on acid. A foodie’s wet dream.

But this is no dream, it’s all real. It happens annually, and it’s all in aid of charity. A charity close to Chris Corbin and Peter Gordon’s hearts: Leuka.

I was lucky enough to be invited to Who’s Cooking Dinner a few years ago at the Four Seasons on Park Lane. This year it was a few doors down in the ballroom at The Dorchester. On this occasion I was even luckier to be a bystander behind the scenes.

I’ve been in many restaurant kitchens and worked the odd front of house shift. But this is different. This isn’t just a run-of-the-mill hotel event that the ballroom kitchens are used to putting on. This is 25 of the finest chefs in London all cooking a four-course meal for a table of 10 who find out Who’s Cooking Dinner just before they take their seats.

Prepping in a space the size of a Playmobil kitchen is admirable and, bizarrely enough, seemingly didn’t faze any of them. A pass that has Clare Smyth, Brett Graham and Phil Howard all plating their mains next to each other – the Michelin man wouldn’t know where to look. The dietary requirements that get fed over earpieces and filter back to the chefs. Two Japanese restaurants that have guests on their respective tables that don’t eat raw fish. An Italian chef that can’t serve his pork ragout to a guest and another that wants to frame the dietary requirements note for a guest on his table because, as he says, “he’s been framed.”

Yet chefs mix and match whatever they can find to please their guests. It all works. A plethora of Corbin & King staff all offering up their night off to take the plates out across the ballroom to their designated tables. It just works. And as a result, guests enjoyed their evening oblivious to the military operation happening behind the scenes.

There’s escalators to deal with (yes, The Dorchester has some in its kitchen, with a Mind The Gap sign to boot), and there’s timings that slip. But everyone manages to pull it off.

Boy, it’s impressive. A throng of hospitality professionals all doing what they do best: making sure everyone is having a good time. Hordes of hard-working people having given up their Monday night to raise as much money as possible for charity. If this were a different industry – perhaps fashion or film – this wouldn’t happen: too many divas, too many egos. The Who’s Cooking Dinner line up is the restaurant equivalent of the Oscars red carpet. Instead though, this red carpet is back of house – away from the spotlight – and as opposed to shouts from the ballroom of ‘who are you wearing?”, it’s “who’s cooking your dinner?”

Over £7m has been raised to date in its 20 years. Now that’s a blockbuster.

Poster Bakes creates buns for a good cause

Everything the CODE team loved eating this week