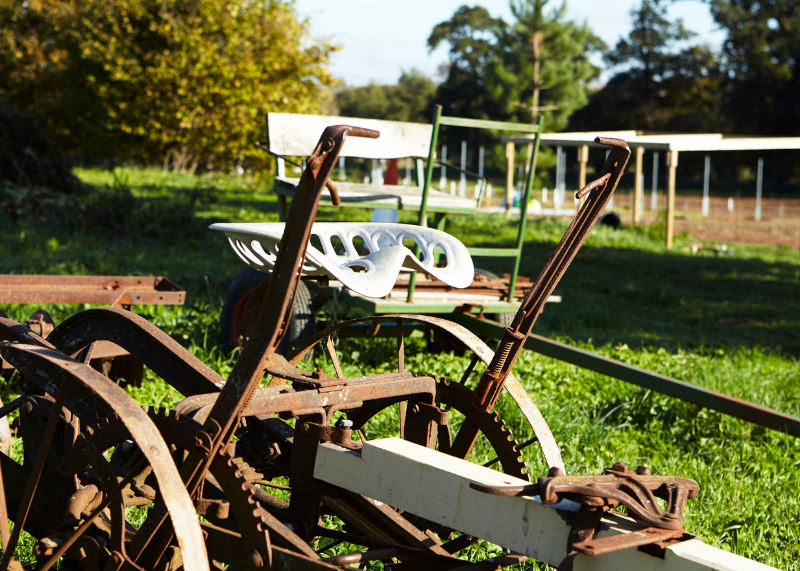 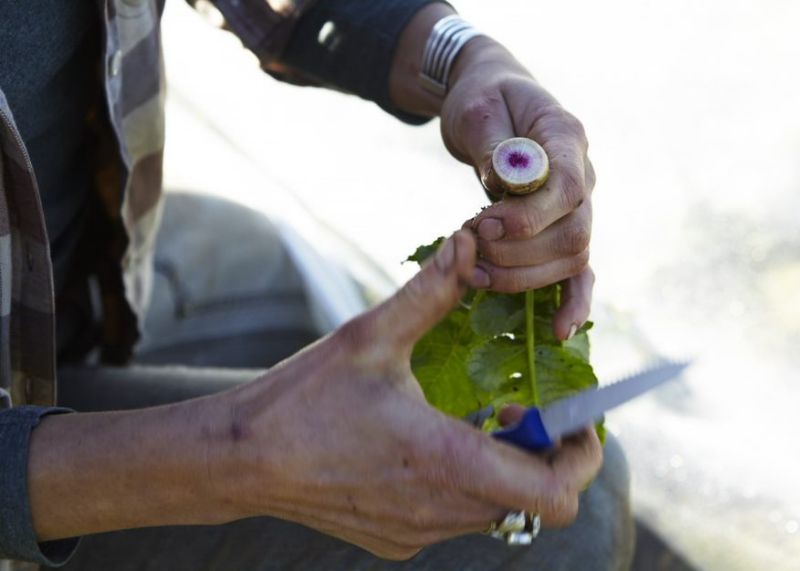 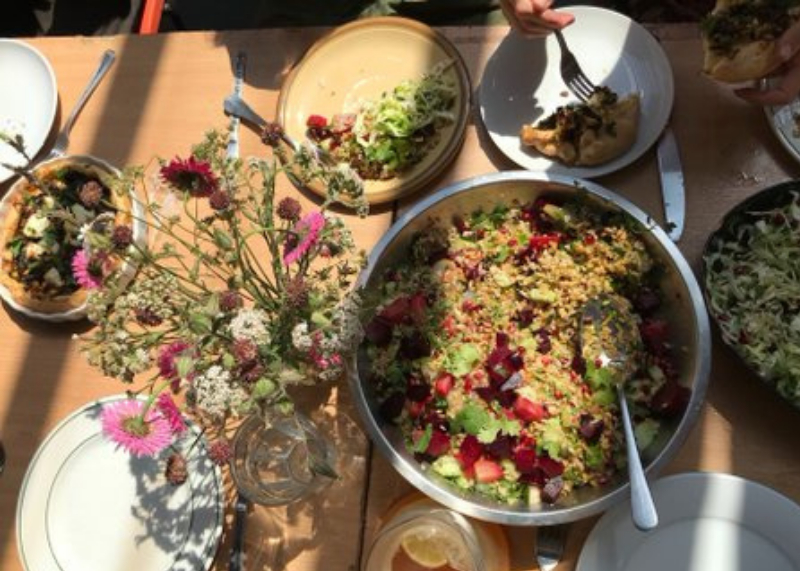 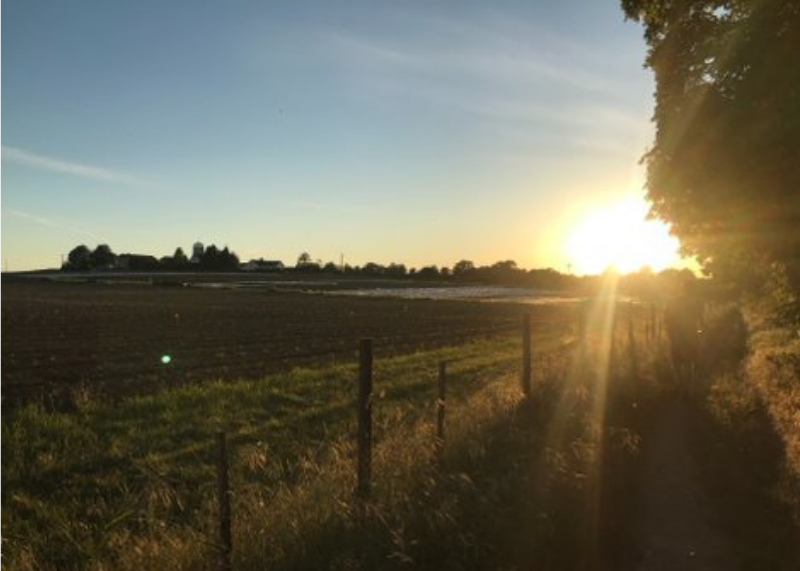 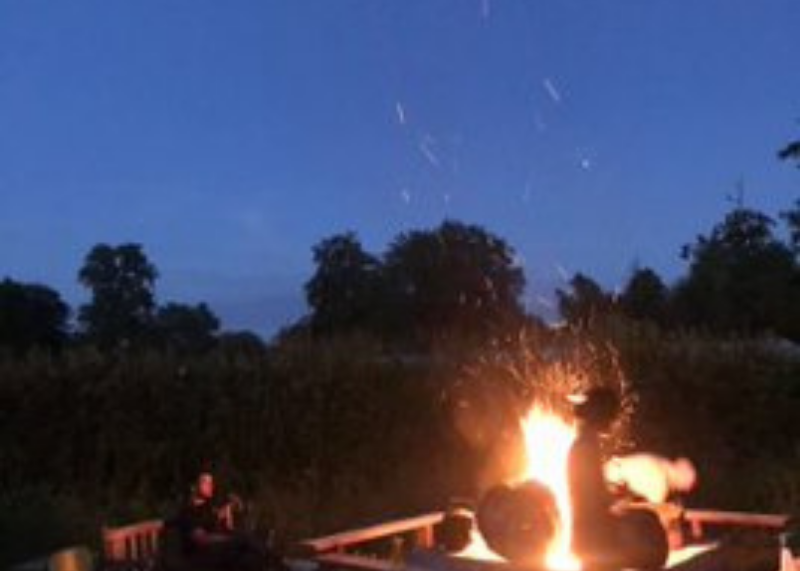 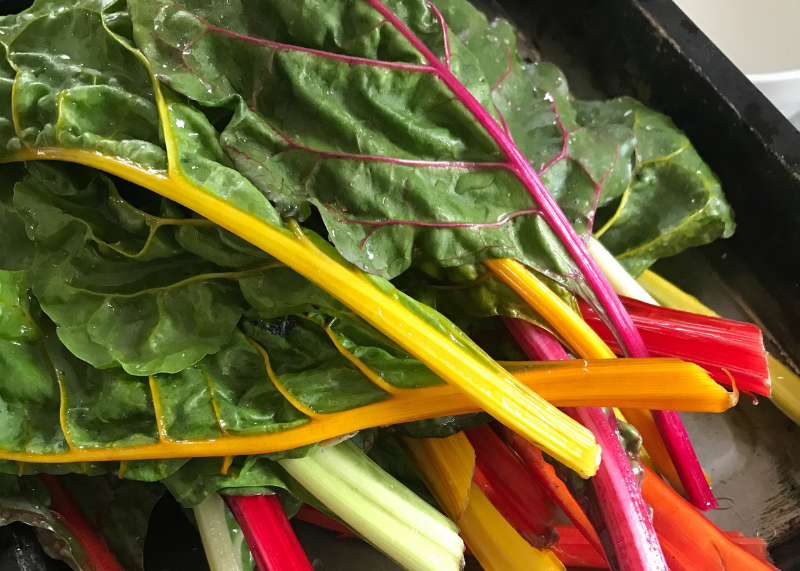 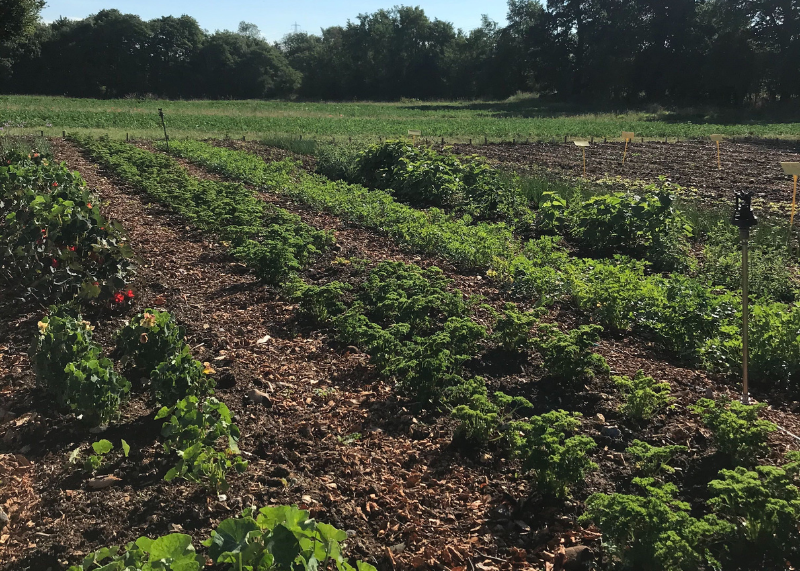 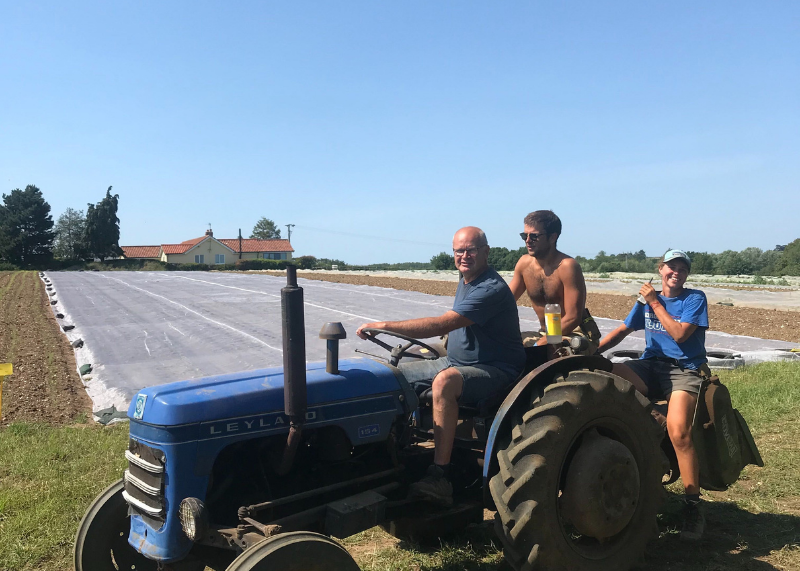 Looking for purpose during lockdown, CODE’s own Chloë Hamilton returned to Flourish Produce, a farm supplying fruit and vegetables to top restaurants that she had written about two years ago. But this time she was weeding, not reporting – joining many furloughed hospitality staff. So what was it like, swapping London’s restaurants for Cambridgeshire’s fields? Read on to find out…

CODE first visited Flourish Produce in autumn 2018 to report on a young farmer who was doing things differently. Having spent years studying regenerative agriculture and learning from pioneers in the USA, Calixta Killander had returned to Cambridgeshire to start her own farm with the help of a pair of working Comtois horses, Bill and Ben. Farming to promote soil health and seeking out rare seed varieties bred for flavour, Calixta was offering an incredible range of produce which had quickly attracted an impressive client list of London chefs.

The day was just a glimpse into a fascinating farming system, where more than 900 varieties are now grown, either as test crops or to sell, and bigger plans are afoot to create an increasingly self-sufficient ecosystem with heritage grains, orchards and livestock. The evolution of Flourish carries a forcefield of energy, generosity and goodwill generated by Calixta and her passionate leadership. It’s why, instead of wringing my hands or going fruit picking whilst furloughed, I got in touch to see if she needed an extra hand at the farm.

It turns out I wasn’t the only one lining up to volunteer. The farm’s accommodation – a cottage, a barn, a shipping container and a caravan – were almost always full, meaning some came to camp and others drove up from London for the day. There was a mix of regular volunteers from the WWOOFing network (Willing Workers on Organic Farms) and other furloughed staff from the hospitality industry, swapping their whites for their work boots to make themselves useful and learn a thing or two about regenerative farming along the way.

It sounds idyllic – the fresh air, fresh produce, the early bedtimes and early starts – and it mostly was. But farm life is not always the romantic picture it’s painted to be. After a sedentary start to lockdown, sudden intensive physical work takes a bit of getting used to. And even after learning how to hoe correctly (stand up straight, FYI), knees will still crunch from crouching, forearms will burn, fingerprints will fade and backs will ache.

The weather is also a fickle friend. Undoubtedly farming in the summer is much more pleasant than in the bleak winter months, but that’s not to say mother nature didn’t try us. Some days were so hot that planting cucumbers in the triple-span polytunnel meant sweat poured off suncreamed foreheads, blurring our vision and watering the soil. And when the thunderstorm came, whipping suddenly across the blue sky and soaking us to the bone, another hour of planting in cold rain was a miserable thought. Though we couldn’t complain, having run for our waterproofs whilst Calixta toiled away in shorts and t-shirt, toughened by farming in the snowy foothills of the Appalachian mountains.

Whilst Calixta worked seven days a week, often from dawn until dusk, the volunteers worked a civilised schedule of Monday – Friday starting with a daily briefing at 07:00. There was a coffee break at 09:00, a lunch hour at 12:00, and tools were down at 15:00 on the dot. Work was so varied that a day could start hoeing the leek beds before the sun crept above the tree line, then onto replanting herbs killed off in the late frost. Rolling up the sides of the polytunnels (and down, and up again) was punctuated by picking flowers, prising apart ranunculus roots and distributing ladybirds among the brassicas. Afternoons turned to tomato pruning, potting melons and seeding radicchio. Or on a Friday it was down to the big field for a weeding session en masse, bopping along to the beats from a portable speaker.

With an increasingly industry-heavy workforce on the farm, being on lunch duty became one of the more daunting tasks, particularly at times when numbers swelled to more than 20 people. Around the lunch table you might find a Masterchef finalist, Anna Tobias, and chefs and front of house from Little Duck, Dandy, P. Franco, Jolene, Rochelle Canteen, Lyle’s, and half the team from Brawn. My early days at the farm coincided with the tail end of the hunger gap, where fresh produce was still scarce and cooking lunch was all about finding new ways to prepare the turnips. Though given how hard everyone worked, any meal put down in front of you at 12:00 was, frankly, a pièce de résistance.

Gradually the land began to proffer up its summer bounty and harvests became longer and more exciting. There were broad beans, peas, beautiful badger flame beetroot, psychedelic rows of rainbow chard, Aztec broccoli, celtuce! (Calixta’s favourite vegetable on the farm.) The fragrant Indian courgettes, along with the eight other varieties growing this year, were a favourite of mine until their novelty wore off and a formidable pace of production meant hours of poking around in prickly foliage to collect them all. Majestic purple kohlrabi came through, then intensely flavoured strawberries, crimson to the core. Tomatoes and cucumbers started flowering and fruiting.

But as thrilling as it was to see the farm spring to life, the industry in standstill meant orders were thin on the ground. The delivery van still set out to London every Tuesday and Friday morning but instead of being stacked high with produce weighed by the kilo, packed carefully into big blue boxes, there were smaller veg boxes for retail and buckets of farm flower bouquets delicately loaded in. They were not sent on their way to make a handsome profit, but just to keep some money, any money, coming in.

Instead the veg began to bolt. The beautiful salanova lettuces grew into miniature Christmas trees and beds were turned with armfuls of aromatic coriander and peppery land cress consigned to the compost. We volunteers ate as much as we could but it wasn’t enough. The compost heap turned into a work of modern art, with sculptural tromboncino courgettes atop slumps of icicle radishes and hispi cabbages. Smoking Goat bought some produce in bulk for fermenting and pickling but otherwise only a small number of restaurants operating delivery services were in a position to continue placing orders.

The business is uncommon in that it operates from field to kitchen without a middleman. It means whilst wholesalers can deliver a heritage tomato at the drop of a hat, Flourish deliveries are dictated by whatever produce is in its prime. If pests or frosts interfere with the order sheet, a substitute might come in its place, but at least the chefs know that whatever arrives at their door is good enough to write a menu around. Calixta is frequently approached by distributers that want to sell her produce on, and though it may have made for an attractive offer during lockdown, her answer is always no. Passing her veg into someone else’s hands means losing control of how quickly and perfectly it can reach the customer.

The reopening of restaurants couldn’t have come soon enough. On one lunchbreak Calixta spoke about how when restaurants closed, she was sure it was the end of Flourish. She was so devastated that she couldn’t say it out loud to those who have worked so hard alongside her. When weeks of lockdown morphed into months, the intense pressure to forge on was palpable. Farm work stops for nothing and even with no one buying, the soil still needed cultivating, plants needed pruning and winter crops needed to be seeded and planted.

In the week leading up to reopening, there was a sense of relief and a new shoot of optimism at the farm as the delivery van was stacked higher for chefs testing out their new menus. But it also meant the unique era of hospitality gone farming was coming to an end: weeks of hard work and weekends round the bonfire (obsessively managed by Brawn’s Will Gee), birthday barbecues, courgette cakes, freshly plucked and roasted pigeon, endless focaccia from ex-Creameries baker Tara Proctor, and many an afterwork beer.

With life returning to near normal, it is an experience that has completely changed perspectives on the produce at prep stations, on the pass and in the hands of front of house. It’s also an experience that would not have been possible, nor half so enjoyable, without the endless generosity from Calixta in sharing her knowledge and enthusiasm and her life at the farm. Far from being an unpaid workforce it felt, for a brief time, like an extended family, distracted from the daily COVID newsreel, getting our hands dirty and eating our greens.

To read more articles from the latest edition of the CODE Quarterly, please click here